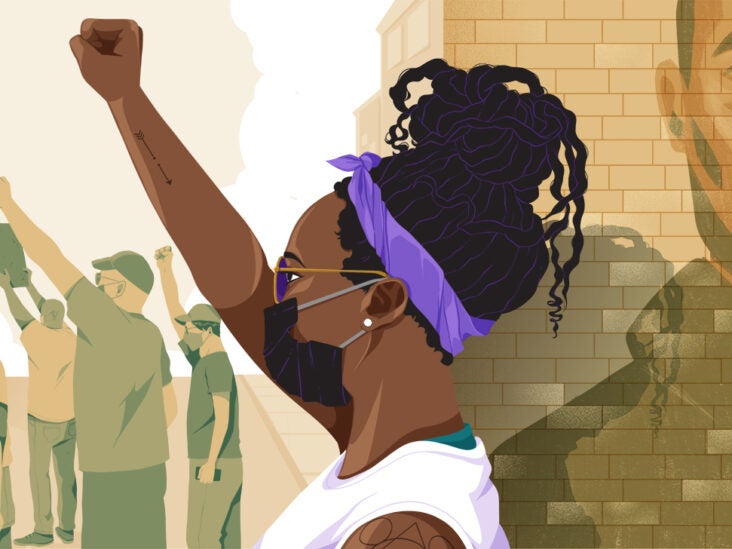 During the COVID-19 pandemic, I’ve found it especially hard to find the positive in dark situations. However, I have found a love for hiking and have a pretty awesome group of friends that don’t mind hiking for hours.

On June 6, we decided to go hiking in Roswell, Georgia, followed by lunch. During lunch, we talked about the most pressing issues of the day.

Weeks earlier, we would have been talking about the pandemic, but instead, we were consumed by the protests happening throughout the country against police brutality and the killing of George Floyd.

This was a new group of friends and our actual first outing together, yet the conversation seemed to stem from a place of comfort. We all had very similar stories, as we’re all African Americans around the same age who landed as transplants in Atlanta.

The conversation was political, painful, and real — and it was a conversation I have only had with those I trust to be transparent with.

We spoke about the protest happening right in our backyard and why we hadn’t participated.

We were all worried about the coronavirus, as COVID-19 was rapidly killing people in our community.

I was especially concerned, as I have been living with Crohn’s disease since 2013, which means I’m at a higher risk for serious complications from COVID-19.

The more we talked, the more we found our way out of the fear that seemed so small in comparison to the magnitude of the issue.

The bigger picture would be: What would we tell our children? We finished eating and planned to head right down to Centennial Park where we heard the protest was taking place.

As I sat in my car before driving off, I took a deep breath and called my mom to let her know my plans. She was far from shocked, as I’ve been jokingly called “Angela Davis” at home because of my feisty rebellious ways when it comes to causes I care deeply about.

I was terrified for my health — but I was more afraid of one day facing a future daughter or son and saying I let a disease stand in the way of fighting for their future.

Weeks before my first protest, I had extensive conversations with my parents about how it was dangerous to protest because of my illness.

I was heartbroken and felt helpless. I was afraid to step outside in a large group to protest, having been quarantined at home with the rest of the world.

Yet, despite not exposing myself to large crowds at the protests, my health was still suffering. The more I watched and read stories about the latest Black or Brown person killed at the hands of police, the worse my Crohn’s symptoms — including pain and sleeplessness — became.

I was all too familiar with this kind of flare-up, as I knew exactly what it stemmed from.

It’s well-documented that stress can aggravate Crohn’s disease, and it was clear to me that I was experiencing a flare-up triggered by the stress of witnessing how systemic racism was affecting people who looked like me.

The first time I experienced a flare-up like this was in 2014, a year after my diagnosis, when Tamir Rice was killed by police because he was holding a toy gun.

I remember having a conversation with my mom about toy guns and how she never purchased one or allowed us to play with them as children.

The idea that certain restraints are placed on a child because of the color of their skin and how it’s perceived has been one of the most hurtful things I’ve had to process.

At the time, I woke up in tears every other morning, dreading going to work and fearful I would be subjected to conversations about the racism I experience every day with people who didn’t understand the extent of it.

I found myself spending hours reading articles and watching television and online videos of dash-cam footage. They all seemed like obvious murders to me, but indictments were rarely issued and even more rarely sustained.

Waking up over and over again to news of another Black or Brown person dying was causing me literal pain. I was on a strict diet and taking my injections regularly, yet I still experienced a swollen stomach, restless nights, pain, and fatigue.

I feared for my father, brothers, and nephews, knowing they would be seen as a threat despite their sweet hearts and kind eyes.

The daily trauma often led to calls with my doctor and prescriptions for steroids to address the inflammation I was experiencing.

We need to have a conversation about mental health and IBD

In June, The Washington Post reported that anxiety and depression rose following the public release of the video of George Floyd’s murder.

The article noted that according to survey findings by the federal government, the rate of Black Americans with these symptoms rose from 36 to 41 percent (a 1.4-million person increase).

Brown and Black people are disproportionately affected by systemic racism and this has a significant impact on our mental health — which often manifests in physical ailments, including chronic diseases triggered by stress.

Although Crohn’s disease is most common among those of European descent, numbers have increased in recent years among African Americans.

Dealing with trauma-induced flare-ups is a daily issue for African Americans within the inflammatory bowel disease (IBD) community, but conversation is lacking about living in a world that causes symptoms to be heightened.

Our issues range from trigger foods to trigger news and there’s no prescription or steroid to alleviate the pain that often follows.

Danielle Cross is the co-founder of BHVA PR, content creator, and blogger located in Atlanta, GA, by way of Newport News, VA. Her content and blogs stem from personal experiences highlighting living with a chronic illness, being Black in America, and the life of an empath. In her work, she hopes to increase the awareness of Crohn’s disease throughout the African American community and to help others discover the power within to live their best life even through the worse times. If you’re interested in her work, find her on Instagram, the Moonchild-ish blog, and her website.