I’m a Nutritionist with IBD. These Are My 5 Favorite Foods for Gut Health 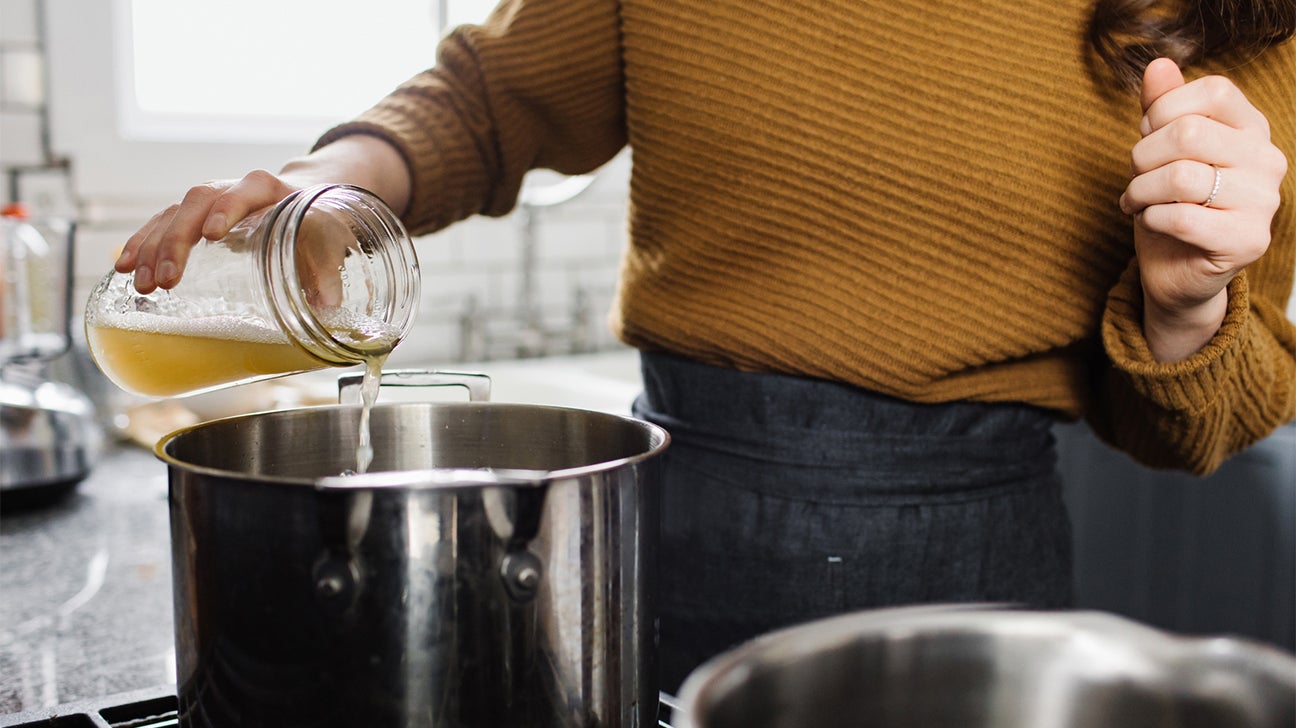 The million-dollar question with inflammatory bowel disease (IBD): “What should I eat?”

While there’s not a singular list of foods that everyone with IBD should toss in their grocery carts (food tolerances vary across the board), there are a handful of foods that stand out as my personal favorites for great gut health.

Bone broth is a food with ancient origins.

It’s made by slowly simmering animal bones with herbs, spices, and vegetables, as desired, for added flavor and nutrients.

Bone broth is rich in collagen, the most abundant protein in the human body, as well as other amino acids and minerals. The practice of slowly simmering bones extracts these nutrients and ends up as an easily digestible broth.

In a 2015 study in Nutrition Journal, collagen supplementation showed to significantly reduce pain, stiffness, and physical function in people with osteoarthritis. This suggests that collagen-rich bone broth may be helpful for those with IBD who experience arthritis as an added symptom.

In one study looking at healing mucosal ulceration instead of just intestinal inflammation, collagen and collagen hydrolysate (which is broken down collagen) significantly reduced rectal bleeding and down-regulated inflammatory markers in mice. In fact, the collagen treatments worked better than a common IBD medication, mesalamine.

You can consume bone broth by:

Probiotics is a bit of a buzzword these days, but what exactly are they?

With IBD, inflammation may cause gut bacteria to become immunogenic, meaning they trigger an immune response. This can exacerbate the cycle that happens with IBD, including chronic inflammation and an unstable intestinal environment.

Probiotic bacteria may help to reduce the production of pro-inflammatory cytokines, which are proteins that are partly responsible for triggering inflammation.

A 2018 meta-analysis found that certain probiotics may be an effective added therapy for IBD. Another 2020 meta-analysis concluded that probiotics show promise in IBD, especially for those with ulcerative colitis (UC).

Currently, more studies are needed on the use of probiotics for inducing remission in people with Crohn’s disease.

Some of my top picks for fermented foods include:

Ginger is a root herb that has been used dietarily and therapeutically for thousands of years.

It’s been recorded through generations to improve many discomforts, including different digestion issues. It has a warming effect and tastes a little bit spicy.

Research has shown that ginger can be effective against nausea and vomiting, and may even be equally as effective as metoclopramide, a medication often used for treating nausea.

A study in the European Journal of Cancer Prevention showed that ginger may help inhibit the expression of colorectal cancer markers in people who are already more susceptible to developing colorectal cancer.

Having IBD poses an increased risk for colorectal cancer, so these anti-inflammatory effects make ginger a promising food.

Lucky for us, ginger can be consumed in several ways:

Fish, particularly oily fish like salmon, trout, sardines, and mackerel, are rich in the omega-3 fatty acids eicosapentaenoic acid (EPA) and docosahexaenoic acid (DHA), which are only found in seafood and algae and may offer some inflammation-fighting benefits.

Studies have shown promising results about the anti-inflammatory benefits of omega-3 fatty acids for the treatment and prevention of IBD, but more research is needed to determine a recommended daily intake.

If you choose to supplement fish oil, make sure to look for a quality-tested brand of raw, unheated fish oil to ensure you are consuming the healthiest supplement possible.

Adding fish into your meal planning during the week is a great way to start consuming more omega-3 fats. The benefit of eating fish versus a supplement is that it comes packaged up with beneficial vitamins, minerals, and protein.

Blueberries might as well be called nature’s candy because of their sweet taste, but they are full of health-promoting benefits.

The deep blue color of blueberries is due to their anthocyanin compounds, which is an antioxidant that counteracts free radicals that can damage cells.

Research shows that blueberries are antibacterial and anti-inflammatory, inhibiting the activation of inflammatory proteins.

Blueberries have also been found to help reduce insulin levels, which produces less cortisol and in turn, less inflammation.

If you’re not already eating these gut-healing foods, try incorporating them one at a time and see how they feel for you.

You can experiment with different methods and figure out how to best enjoy these tasty, health-promoting foods.

Alexa Federico is an author, nutritional therapy practitioner, and autoimmune paleo coach who lives in Boston. Her experience with Crohn’s disease inspired her to work with the IBD community. Alexa is an aspiring yogi who would live in a cozy coffee shop if she could! You can connect with her on her website or Instagram.