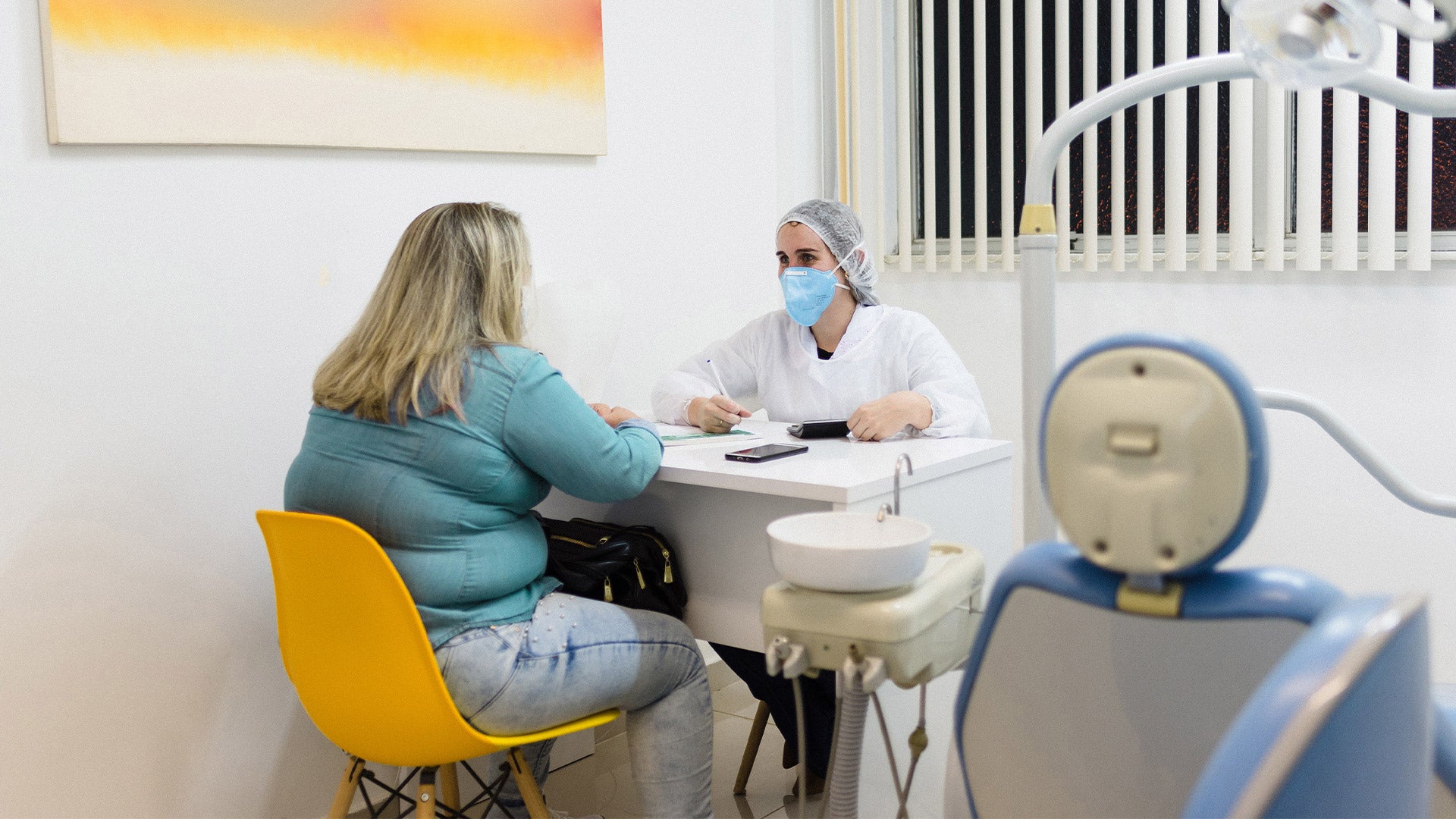 It is possible — as these stories and my own prove — to have a health issue that has nothing to do with your weight.

I’ve experienced weight shaming by doctors for most of my adult life.

It started when I was 19 and experiencing symptoms of inflammatory bowel disease (IBD), such as rectal bleeding, stomach cramps, and drastic weight loss in a short period of time.

I’d had a history of bulimia during my teens. And for this reason, doctors didn’t believe me or even look into my symptoms.

I was told that my weight loss was because I had an eating disorder, which I had been in recovery for for years, and that any rectal bleeding was actually just my period.

Months later, my bowel perforated. I had been living with ulcerative colitis, and I was given a stoma.

Seven years later and almost 140 pounds heavier (due to a number of factors like medication and a pandemic), I now regularly experience fatphobic comments from medical professionals.

I’m still experiencing issues from my IBD, but every symptom has been shrugged off due to my weight.

Doctors offer me weight loss leaflets at every appointment, and my surgeon told me I looked “too well nourished” to be in a flare.

I’m not alone in experiencing fatphobic comments from medical professionals.

In one study, researchers surveyed 600 adults with a body mass index (BMI) higher than 25, which is considered “overweight” (at least based on this controversial health assessment).

They found that 21 percent felt judged about their weight by their doctor — trusting them less as a result.

The results raised concerns about the potential effects on the doctor-patient relationship and patient outcomes.

I spoke to five people of size who have been completely let down because of fatphobic beliefs and comments. Here’s what they said.

‘I was reminded of my weight gain down to the pound’

“I am lucky to have not experienced many health issues during my adult life, so trips to the doctor have been infrequent. In 2019, I did take a visit for a blood pressure test for my pill prescription.

“The doctor I saw on that day happened to be the same one who saw me 11 years previously when I came in with a kidney infection. While taking my blood pressure, he was reading my file off his computer screen and told me how much weight I’d put on, to the last pound, since he’d last seen me, and that I should consider doing what I can to lose it.

“I pointed out that I was a teenager when I last met him and dieting nonstop, working in retail 40-plus hours a week, which meant I was on my feet all day, every day, and that I was 30 now with a demanding office job that had me sat at my desk for 9 hours a day.

“He didn’t really seem to understand the difference between those situations and just told me I’d be at more risk of a blood clot if I didn’t lose weight. I understand the need to share information, but I was shocked by how he went about it.

“Anytime I went to that GP surgery after that, I specifically asked for a female doctor.” — Holly

‘They blamed my pain on eating candy’

“When I was in school and 15, I had a really bad binge eating disorder and I weighed about 145 kg. I was feeling really poorly for almost a week with a tummy ache that started around my belly button and then traveled to the side.

“I was at school. It was a Tuesday morning and suddenly I started vomiting in my science lesson, saying I felt really ill.

“I literally felt something pop, like when you squeeze a stress ball too hard and the little bag of powder breaks inside. They sent me home and my mum made me go to the doctor right away, and the doctor weighed me and said, ‘Have you had sweets or junk food recently?’

“I said, ‘Yes, but it’s not that. Something popped in me.’ They just told me I had too much sugar and to drink water and try to go to the toilet, and sent me home.

“I got home and broke out in a fever, and I was literally screaming in agony, so my mum took me to the ER. They took one look at me and listened to my symptoms and rushed me in for laparoscopy surgery and found out my appendix had partially ruptured and had to be removed right away.

“It was almost 10 years ago, but I’m still always so frustrated and anxious to go to the doctors. I go in with chest pain, they ask to weigh me. Like for what? It’s ridiculous.” — Kiki

‘I was fat shamed during my pregnancy’

“I’m currently pregnant and have experienced what I regard as fatphobia during my maternity journey from my hospital.

“At my booking appointment, the midwife told me my BMI is ‘big,’ and she told me not to eat bread or pizza so I wouldn’t get gestational diabetes. I have to take aspirin, too, so I was recommended growth scans at weeks 32 and 36.

“When speaking to a consultant, he said that these appointments were given because of my ‘body weight.’ I told him no one said that to me, and that I was told it was due to the aspirin, and he told me my weight must be a part of it too.

“Due to health anxiety and past trauma, I’ve requested to not have any unnecessary appointments in hospital, as of yet I don’t have any diagnosed pregnancy-related health conditions and was told my consultant appointments would be canceled.

“However, I’ve suddenly been given an extra two scans alongside a lot more consultant appointments and have no idea why. I got in touch with a perinatal nutritionist back in January to help me with my nutrition, despite the fact that I’ve not put on any weight at all in pregnancy, and I’m 27 weeks now, but all the worrying stories I’ve been told about being overweight and pregnancy got to me.

“Anyway, I spoke to the nutritionist recently, and she told me my extra scans and consultant appointments could be because of my weight. I felt like I was the fattest pregnant person they’d ever seen, and it made me feel like I’m doing something wrong and have put my baby in danger by being pregnant and overweight.” — Naveesha

“I am plus-sized, and every time I go to the doctors for my contraceptive injection, I have to be weighed and we speak about the effects my weight could have in the future. I fully respect they have an obligation to keep me informed, but every now and then I have to have blood tests, and these tests always come back clear.

“But when I am told [the test results are clear], it’s like they are disappointed that my weight isn’t causing any issues. I finally agreed to some help because I wanted to become more fit. [The staff at the weight management center] asked about my lifestyle, which involves being on my feet for 8 to 12 hours a day for work. Even though they knew I am fit for my weight, all they kept pushing was a gastric band.

“I am a very confident person, but it made me think if that was someone else, it could have had a really bad effect on them mentally. I brought it up to my nurse and said I wanted to put a complaint in as I feel like I was treated very poorly. Nothing ever came from it.

“Still, now every 12 weeks when I go to see my nurse, she will always say any problem I have is because of my weight. It’s like if you are over a certain weight then it will always be a problem. Rather than looking at each individual person they just put you into a bracket and throw statistics at you.” — Becca

“I was in the hospital for 6 weeks and I felt like my weight was made to be an issue the whole time I was there. They asked about my weight and told me I was too heavy and too fat. I explained how much weight I had lost, but the nurse continued making unnecessary comments while I was on a small ward, in front of six people.

“She sat at her desk and asked me for my BMI, which I didn’t know. She asked me to repeat my weight in front of everyone, including patients and staff. Everyone heard. When I mustered up the strength after a few moments, I asked why it mattered. She told me my BMI was too high.

“She questioned me loudly about what I could and couldn’t do, and asked whether I could move myself. When I told her it was too excruciating, she proceeded to question me. Nobody else I had come across at the hospital was made to feel the way I was. Nobody else mentioned or complained of my weight.

“For the last few months I have made huge progress and have felt very positive and happy. To end up in the hospital and to be in excruciating, chronic pain is hard enough. But to be treated like this by a nurse has knocked my confidence, and I now feel embarrassed and close to tears about the way I was treated.” — Jemma

It’s time to end the stigma

Knowing I’m not alone in having doctors assume my symptoms are due to my weight is both a comfort and a kick in the teeth.

People living with chronic conditions deserve so much better.

We desperately need to break the shaming and stigma associated with being fat. BMI is outdated, and being fat isn’t a complete indicator of poor health.

It is possible — as these stories and my own prove — to have a health issue that has nothing to do with your weight.

Article originally appeared on May 27, 2021 on Bezzy’s sister site, Healthline. Last medically reviewed on May 20, 2021.

Hattie Gladwell is a mental health journalist, author, and advocate. She writes to diminish stigma and to encourage others to speak out. Follow her on Twitter.